One of Toronto’s Best Kept Secrets

Cut n run started in the basement laundry room of a Willowdale project, cutting the hair of friends and family. It started getting to busy and so the owners decided to raise the price to cut the traffic down, that didn’t help in fact it got busier.

We move to a new and bigger location

Happy to be in our new location so much room to create our legacy, words cannot express how we feel, thank you everyone for their continued support it truly means a lot 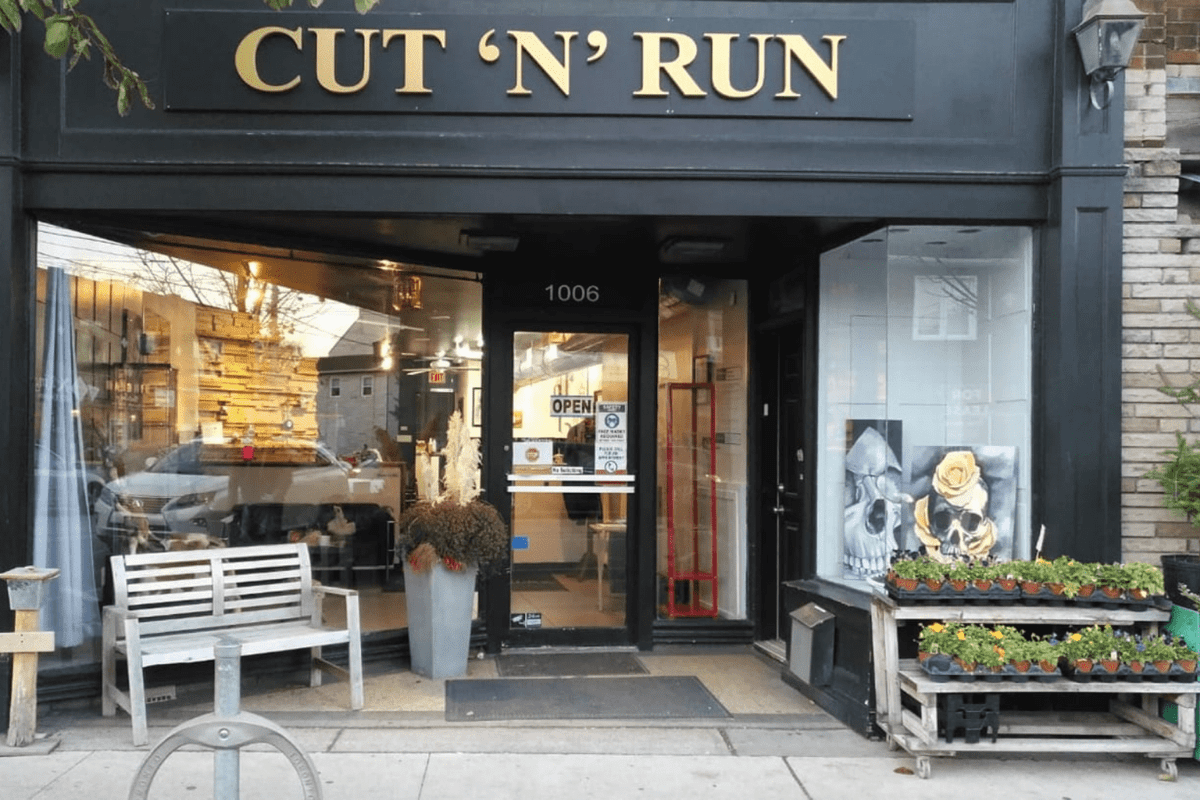 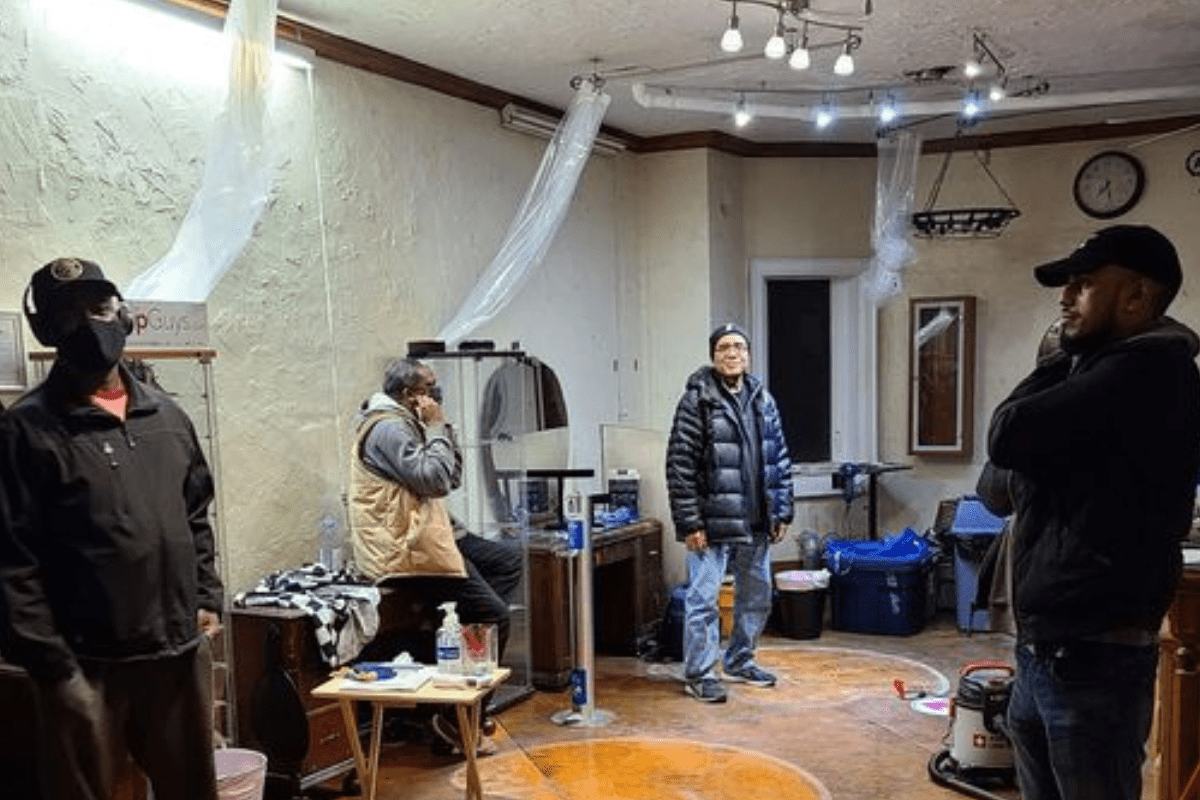 Our location for 12 years

Reminiscing about the past twelve year at 1009 Kingston rd. I want to thank all of my wonderful clients that helped us move to our new location, thank you from my soul, I’ve never felt so much love, thank you beaches community for embarrassing us into your lives, we will always do our best to keep everyone well groom and most of all safe.

It’s hard to shake a core belief. The world has worked hard to shape you and cement those unshakable “truths”. These nuggets of information don’t even have to be legitimate, what matters is that we don’t know how to let them go.

When I spoke with Peter Gowdie, owner of Cut N Run Barbershop in Kingston Road Village, we explored these dark corners of “what we think we know”.

Peter was born in Kingston, Jamaica and came to Canada when he was six years old. He is an easy-going person with a generous spirit. His shop is busy, and the phone is constantly ringing with people eager to book appointments. His hard work and determination have clearly paid off.

“There was only me and two other Black kids, one was my friend Dwight. Not all the kids were mean but there were kids that called me names every day,” Peter said. “I remember this clearly, they would say my nose was big, so I would start squeezing my nose to try and make it smaller. They said my lips were too big, so in pictures I would try to hold my lips in. I had no idea that anything was wrong with me until I started going to school there.”

He didn’t tell his mother, she was busy and he didn’t want to bother her.

“I mostly just hung out with my buddy Dwight. I kind of accepted it, even though they would say, ‘No you’re not allowed to play’ I still played. I wasn’t deterred, but I felt it when I went home.”

Eventually Peter went to high school in North York which was much more diverse, and he found kids with whom he connected. It was around this time he started cutting hair.

“I started in my neighbourhood because my mom couldn’t afford to pay for my haircuts as often as I would have liked. My friends needed haircuts as well. I didn’t think I could ever make money haircutting, but my sister is a hairdresser and she inspired me.”

It was his sister that took Peter back to Jamaica at 20 years old for the first time since he’d left as boy. “It was a culture shock! I’d never seen so many Black people in my life! We went to a concert and it was overwhelming for me. I thought I might faint,” he said.

Once he got over the shock he was thrilled. “I embraced the culture. This is where I’m from. I felt more Jamaican. I fit in. Nobody looked at me different.”

In the early 1990s, Peter, his sister, and a friend went to Atlanta to cut a bigger population of Black hair. “We loved it but we couldn’t work in a salon because we found out we needed a license to cut hair in the U.S.”

Ultimately, they figured out the way around this was to cut people’s hair in their homes; Cut N Run was born.

When Peter eventually returned to Toronto, Cut N Run was re-established on the Danforth in 1999. It was going well for nine years, until the new landlord started making life difficult for him.

In 2008, Peter’s search for a new location lead him to Kingston Road. “I was trying to stay as close as possible to the old location to try and keep my clients. The landlord told me he wasn’t sure this was going to be the ‘right fit’ for the neighbourhood. But we’re still here.”

When I asked him how the transition to the Upper Beach was, he said, “It’s been great. The biggest challenge we had at the start, was a lot of kids around here are hockey players, so they had long hair, they weren’t getting their hair buzzed. I’ve been cutting hair for so long, but I never had the chance to cut with scissors and a comb. We had to adapt. We got lessons on how to cut straight hair, without using the clippers all the time.”

Overall, he felt the community was very welcoming.

“At first, we were messing up haircuts. One lady came back with her son so I could fix the first cut I had given him. It was a learning curve. But what matters is that they gave me another chance. Over a decade later, their son has grown up and they are still clients here.”

Life has come full circle for Peter as his son now goes to Adam Beck Public School. When I asked if the school had changed since his own childhood, Peter said, “It has a little more diversity and my son has lots of friends. It’s definitely better.”

Outside of school, his son told him on two different occasions he was called the “N” word. When I asked him how he handled it he said, “I told him, ‘It’s a bad word and they shouldn’t be saying it’ but I didn’t get into it because I didn’t want to give the word power. But when it happened the second time, it really hurt my heart.”

Peter’s strategy is to keep building his son’s confidence. He truly believes that with education and an open mind, Canada has the potential to do better when it comes to racism.

Seeing evidence that there are good people out there continues to give Peter hope that as a society we are moving in the right direction. This doesn’t mean that as a Black man he doesn’t live with the understanding that he will often be perceived negatively.

“If I have to get off the bus at the same stop as a white lady, and happen to be going in the same direction, I feel like I have to slow down, even if I’m in a rush. Don’t try to walk fast! That’s how I feel in my head because you’re going to scare this person. I don’t know why I’m feeling like that.”

Unfortunately, we know why he’s feeling like that; society has told him he’s a threat.

“I’m self conscious just being in stores, making sure you keep your hands where people can see them, so they can make sure you’re not stealing anything,” he said.

This inner dialogue is exhausting and it’s not uncommon.

I asked if any of his experiences had ever lead to encounters with the police, and his answer surprised both of us. “When I was younger, sometimes police would stop us. But, rightfully so, there was whole bunch of us Black guys in a car. Maybe it looked a little suspicious, I don’t know. I feel like it did…”

His voice then trailed off as he was speaking. When I ask why would it would look suspicious, he shakes his head and chuckles. “They’ve got me convinced.”

He repeated the statement this time with the unfair realization of how crazy this stereotype is. “We look suspicious driving in a car together.”

The extent of ‘what we think we know’ runs deep. It is so ingrained in our culture that even we, the recipients of discrimination, have sometimes come to believe the propaganda.

Every time a white kid tells a Black kid his nose is too big, every time someone uses the “N” word, every time someone follows a Black person in a store, every time someone tells a person of colour ‘we don’t think you’re the right fit’ those sentiments sink deeper and deeper. At first it’s a bruise, then it’s a flesh wound, and before long it’s a belief that is coursing through our veins. The message, as Peter so accurately put it, is to tell yourself, “Don’t be too Black.”

But being Black isn’t a choice; allowing yourself to challenge your core beliefs is.

Peter is a positive person who believes we can change. He knows it will take time, but every day is an opportunity to learn more about each other.

Peter’s mind is open to everyone and so is his barbershop, so walk in, get a cut and let go of some things you thought you knew.

Mimi Liliefeldt is a Beach resident and business owner. She can be reached at mimi@missfit.ca

Back to top
We use cookies on our website to give you the most relevant experience by remembering your preferences and repeat visits. By clicking “Accept”, you consent to the use of ALL the cookies.
Cookie settingsACCEPT
Manage consent